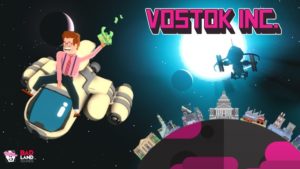 Nosebleed Interactive, based in Newcastle and part of the Round 1 portfolio of funded companies, launched their game Vostok Inc with Badland Publishing this week.

In the tongue-in-cheek sci-fi shooter you play as, “a greedy, space-capitalist with the ultimate goal to get filthy, stinking, rich! Of course, it wouldn’t be much of a shooter if there weren’t enemies to blast on the way to untold riches. You’ll encounter a variety of different alien races (each with their own agenda) with assets ready for “liquidation.” Each dead enemy, defeated boss, and vanquished environmental hazard drops loot, making every encounter a ripe business opportunity. Once you’ve collected enough moolah it’s time to land on planets and start mining, terraforming and colonising.”

Andreas Firnigl, Director at Nosebleed Interactive, said the support from UK Games Fund was critical to the game making it to market.

“The funding from the UK Games Fund came at exactly the right time for us as a company. Vostok Inc would not have got to the point it’s at today in being released on so many platforms were it not for the support from the Fund; not only did the financial support help us massively on the actual development of the game, so too did the business support activities help us in getting the game in front of the right people.”

“We’re delighted to have been able to help a talented outfit such as Nosebleed Interactive release their game. The support we offer our community of funded companies has always been about more than just grants; through our network of industry contacts we aim to spread the good word about the growth of SME games development in the UK and help create lasting and rewarding partnerships for the future.”

A great day for our community as news of our Round 9 companies being announced means that our portfolio continues to grow! Big shout out to all the UKGF funded companies that have endorsed the latest Round 10 applicants. That's what a shared community interest looks like! twitter.com/ukgamesfund/st…

FUNDED COMPANIES ANNOUNCED! @DCMS reaffirms £8m funding commitment to the UKGF as Round 9 companies announced. “The UKGF has played an invaluable role in growing our national sector..." For the full list of funded companies, see: bit.ly/3NBglsr pic.twitter.com/CeBhjqcnnJ

‼️ ROUND 10 CLOSED ‼️ We are now closed! Thanks to all applicants for submitting to Round 10. We'll be in touch with everyone soon.